In 2012, every state had a warmer-than-average year. A total of 19 states, stretching from Utah to Massachusetts, had record warmth in 2012 and an additional 26 states had a Top 10 warm year.  Along with all of the extreme temperature highs, 2012 also brought a record year for tropical storms making mosquito control a challenge for 2013. 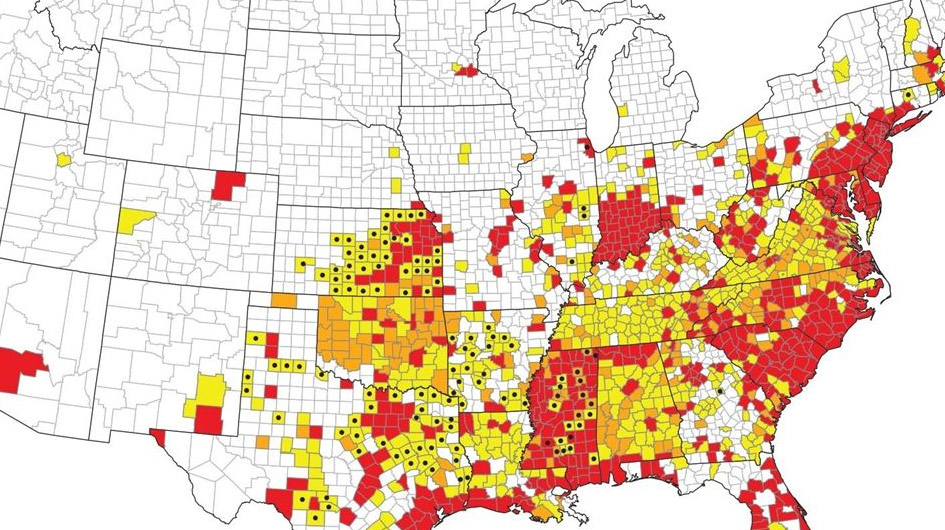 Due to flooding rains and extreme temperatures produced by nationwide tropical storms in 2012, ideal breeding conditions and record high predictions for the population of summer’s most dreaded pest, the mosquito, are on the rise.

According to entomologists at the University of Florida, rising mosquito populations aren’t the only thing to worry about during the outdoor season in 2013.  A new breed of mosquito has manifested from the nation wide tropical storms of 2012.

A swarm of Gallinippers, or “MEGA MOSQUITOES” as they’ve been called, is set to invade central Florida this summer.  Gallinippers are said to be 20 times larger than regular mosquitoes and their bites are not just itchy and irritating but painful.

The Gallinippers are predicted to hatch this summer because of the flood waters caused by tropical storms.  Usually their eggs just stay underground, and don’t all hatch at the same time but when the water pushes them above ground, they hatch.

Mosquito populations are also predicted to be at all time highs in areas of the Northeast where mild winters and mellow spring weather with warm and wet conditions have created the perfect environment for breeding.

The city of New Orleans has reported an elevated number of mosquitoes this year and many cities in Northeast Illinois, as well as St. Paul Minnesota pest control workers have reported a 50% increase in call volume with complaints of excessive mosquito activity.

Dallas County,Texas is also anticipating an active mosquito season.  The county has tripled the number of mosquito spraying trucks available for this West Nile Virus season and the County Judge is backing a new state law that attacks abandoned swimming pools which are prime breeding grounds for mosquitoes.

With the mosquito population on the rise, nationwide precautionary measures are being taken to prevent the spread of mosquito-borne diseases like the West Nile Virus, Malaria, Eastern Equine Encephalitis and Dengue Fever.

First, do a walk-through on your property and dispose of tin cans, old tires, jars, plant pots, and any other containers that can hold water.  It doesn’t take much water and it doesn’t take much time. Almost anything that will hold water for one week can produce mosquitoes.

Many places around your home may be causing mosquito problems. Don’t give mosquitoes a chance.  Eliminate all standing water from your property.

If you have pools, ponds, rain barrels or puddles on your property, you can use mosquito dunks, mosquito bits or mosquito barrier to kill mosquito larvae before they have a chance to develop into mature biting insects.

Mosquito dunks and mosquito bits kill mosquito larvae in standing water by releasing a constant dose of B.T.I. which is a group of bacteria that causes a disease specific to mosquito larva however, it’s harmless to humans, pets and aquatic life.

Mosquito barrier is an all-natural “super garlic” insecticide that kills mosquitoes and other soft-bodied insects on contact.  Mosquito Barrier can be used to kill and repel adult mosquitoes, and when mixed with canola oil it can be used to coat the surface of standing water and suffocate mosquito larvae.

For more tips on how to eliminate mosquito breeding grounds, check out our How to Kill Mosquito Larvae section.

It’s never too early to start preparing for mosquito season.  There is still a lot of snow and cold weather to come in many parts of the country, but mosquito season will be here sooner than you think.

Start your mosquito control efforts early and stay a step ahead of mosquitoes in 2013.

In this short video, we’ll discuss how to eliminate mosquito breeding grounds [http://www.northlineexpress.com/outdoor-patio/mosquito-control/…

Revive A Smoldering Fire With A Fireplace Bellows

In this short video Melissa introduces you to our 15″ Pine Fireplace Bellows [http://www.northlineexpress.com/fireplace-hearth/fireplace-accessories/…